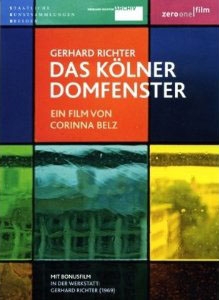 This documentary film about Richter’s Cologne Cathedral Window by Corinna Belz was released in 2007 in association with the Staatliche Kunstsammlungen Dresden and the Gerhard Richter Archiv. Entitled Das Kölner Domfenster [The Cologne Cathedral Window], the documentary was made over a period of two years, following the many stages of the project’s development, from the creation of glass samples based on medieval recipes to the computer generation of numerous random sequences, from the approval of the designs to the unveiling of the final window. Featuring a variety of interviews, including with Dr. Barbara Schock-Werner, Architect of Cologne Cathedral, Günter Hettinger, Stained glass restorer at the cathedral workshop, Cologne, programmer Klaus Hagemeister, and Gerhard Richter himself, Belz’s film offers considerable insight into the process of undertaking this major commission. The film, in German with English and French subtitles, is accompanied by a documentary from 1969 by Hannes Reinhardt entitled In the Studio: Gerhard Richter [In der Werkstatt: Gerhard Richter], in German, French and English.