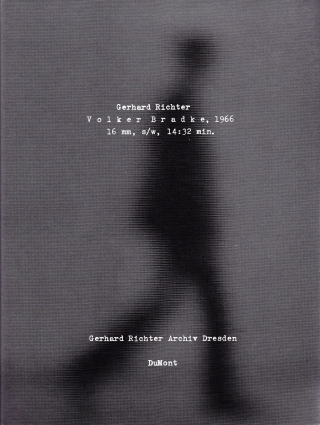 The book Gerhard Richter: Volker Bradke, 1966, 16 mm, s/w, 14:32 min. is the sixth volume of publications from the Gerhard Richter Archive, Dresden. It is dedicated to the artist's eponymous film, which is enclosed in the book as a DVD.

As the only work in this medium by Richter, the film was created for the exhibition Volker Bradke that took place on 13th December 1966 at Galerie Schmela in Düsseldorf.
For the purpose of this exhibition Gerhard Richter addressed the person Volker Bradke in different mediums. In addition to photographs, a banner and a large-scale painting Volker Bradke [CR: 133], the film had been screened. Richter transferred one of the stylistic features of his paintings of that time into film: the blurring.
An essay by Hubertus Butin examines the film in the context of this exhibition. He analyses the meaning of blurring in the film, comparing it especially with the blurring in Gerhard Richter's graphic art.

With a preface by Dietmar Elger.