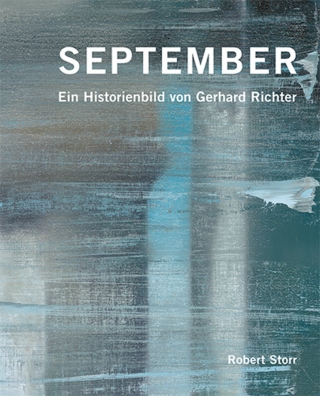 In this publication, eminent American scholar and curator Robert Storr offers an authoritative consideration of September, Richter’s 2005 painting made in response to the attacks on the World Trade Center of 11 September 2001, asking “what is the meaning of a single, small, almost abstract depiction of one of the most consequential occurrences in recent world history?”

Opening with a vivid personal account of being in New York that day and paying particular attention to the role of the media, Storr deftly explores the geo-political context of the attacks, capturing the effects of the atrocity on a deeply human level while navigating the complex web of political, social, religious and cultural factors that it embodied and the discourse it has provoked.

Along with an erudite analysis of the creation of the painting, Storr’s treatise develops by means of an insightful study into the themes of terrorism, murder, violence and war in Richter’s oeuvre, from the bombing of cities during World War II to the controversial cycle of paintings October 18, 1977 (1988) depicting West German terrorists, the Baader-Meinhof group.

In 2009 September was gifted to the Museum of Modern Art in New York. In making a valuable contribution to the understanding of a significant work by one of the world’s foremost artists, this publication demonstrates how vital painting and its readings can be for engaging with the complexities of major events in the world today.